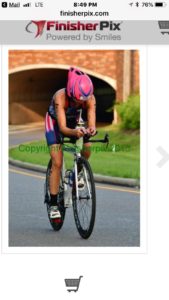 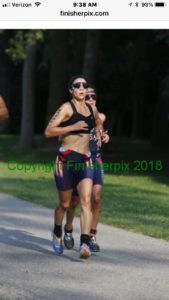 Not only is this my current hometown , but it was also the home of the 2018 USAT National Championships! My favorite event of the year!  The weather was literally amazing despite the storms off shore, causing there to be too rough of waters for the swim portion on race morning.  That’s right! They turned our race into a Sprint Duathlon last minute-talk about freaking out !!

I was so nervous that morning looking out at the rough lake and wondering how much that was going to affect my swim time which was disappointing, but I was going to get through it.   Around 20 minutes out from race start, I’m hiking up my wet suit and the announcer simply tells all athletes to report to transition and stand by their racked bike.  This is where the broke the news to us about the race being changed to a duathlon and explained all of the rules to us.  I tried to hard to focus and listen but I just decided to have fun with it and try my best- and that’s exactly what I did.

The first run section was 1.5 miles and I got after it as much as I could- so much that when I was in transition to get on the bike, I was WAY out of breath, but I had so many family and friends cheering me on, that I was able to get through it .

The bike ended up being one of the best bike portions of my life.  I tried to push it as hard as I could in the big sproket and it really helped my speed.  I was keeping up with the fast girls for the first time ever!!!

The second run was pretty painful but again, was only 1.5 miles long. I pushed and pushed and tried to keep up and pass as many girls as I could and I managed to finish in 7th place.  I was ECSTATIC about this- I have never finished better than 13th.

So after many celebrations after the race,  it’s time to start getting focused on raising money – because guess what—- I”M GOING TO SWITZERLAND NEXT YEAR!!!!!  ITU World Championships 2019.  LET’S DO THIS!!!!!!